View cart “Tarzan and the Valley of Gold” has been added to your cart.

Get 4 hardcover books (Tarzan® 13-16) of the
Edgar Rice Burroughs Authorized Library™
for the price of 3! 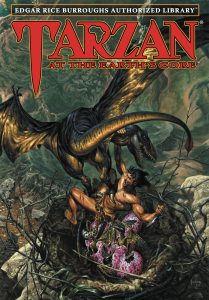 David Innes was a captive in Pellucidar, the strange world within a world that lies under the Earth’s crust. To rescue him, Tarzan comes into that savage, prehistoric land at the head of an expedition equipped with every modern device. But Pellucidar is not like the jungles the ape-man knows. Here are saber-toothed tigers and every savage creature from the beginning of time. Here the horizon curves back on itself and the sun hangs always in the middle of the sky. And now, for the first time, Tarzan is hopelessly lost in a land teeming with unknown, gigantic killers…where even time has no meaning! 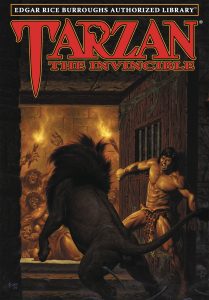 La was in trouble. The high priestess of the Flaming God in the ancient city of Opar—forgotten outpost of Atlantis–had been betrayed by her people and locked in the eon-haunted dungeons until Tarzan came to rescue her. La still loved Tarzan, but Tarzan brought her to his people and then left her. Now, together with a strange woman of Tarzan’s kind, she lies bound in the tent of an Arab slave trader, dreading her certain fate. Meanwhile, Tarzan is beset by a strange band of men who have invaded his land…led by a madman bent on evil subversion! 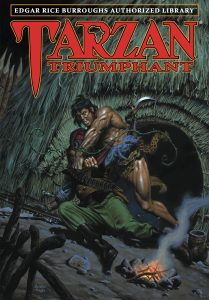 Evil men have come to the land of Tarzan of the Apes, looting and killing as they move. But other evil lurks in a small valley of the Ghenzi Mountains, where the last remnants of an ugly, perverted people dwell in what they call their faith—an ancient belief that came from Rome nearly 2,000 years before.

Now they are wicked and many of them are insane. And now they have captured Lady Barbara Collis and mean to use her as a human sacrifice—unless Tarzan arrives in time!

Tarzan and the City of Gold (Tarzan® Book 16) 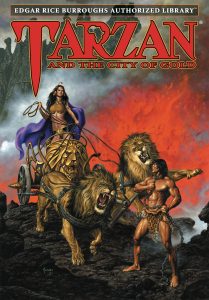 When Tarzan of the Apes frees a man being tortured by cruel bandits, he is surprised to learn that the stranger comes from no race or country the ape-man knows. He is from the fabled land of Onthar, where lie two ancient cities unknown to the outside world. One is Athne, city of ivory; the other is Cathne, city of gold and evil. There great prides of trained lions are used to hunt down men and wage eternal war. And there Tarzan meets the beautiful queen Nemone, who is determined to have Tarzan as her king…or feed him to the lions!