Expected to Ship First Quarter of 2023

Get 4 hardcover books (Tarzan® 17-20) of the
Edgar Rice Burroughs Authorized Library™
for the price of 3! 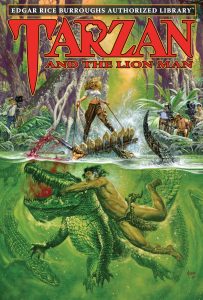 A great safari comes to Africa to make a movie, struggling across the veldt and through the jungle in great ten-ton trucks, equipped with all the advantages of civilization. But now it is halted, almost destroyed by the poisoned arrows of the savage Bansuto tribe. There is no way to return. Ahead lies the strange valley of diamonds, where hairy gorillas live in their town of London on the Thames, ruled by King Henry the Eighth. And behind them comes Tarzan of the Apes with the Golden Lion, seeking the man who might have been his twin brother in looks—though hardly in courage! 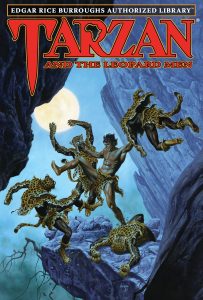 As the steel-clawed Leopard Men look for victims for their savage rites, the secret cult strikes terror into the hearts of all the villagers. Only Orando of the Utengi dares to declare war on them. And with Orando goes Tarzan of the Apes—but a strangely changed Tarzan, who now believes that he is Muzimo, a spirit or demon who was Orando’s ancestor. But there are traitors among Orando’s people. And in the village of the Leopard Men is Kali Bwana, a young American woman who has come to Africa to find a missing man. Only Tarzan can save her… 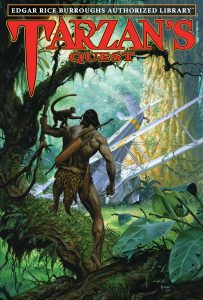 Tarzan of the Apes had heard only rumors of the Kavuru—a strange, evil tribe said to have long reaped their human prey from among the local natives. But when they stole the daughter of Muviro, chief of the Waziri, the Lord of the Jungle sets out in search of their legend-shrouded village on a mission of rescue—or, if need be, revenge. He does not know that his trail runs close to that of a strange group of survivors of a crashed plane—including his beloved mate, Jane, who must call upon all the skills she has learned from Tarzan to keep herself and her companions alive amid the terrors of the jungle and an even worse danger lurking in their own party. But the stranded Europeans and the ape-man are destined for a rendezvous with blood and fire—in the dreaded temple of the Kavuru. 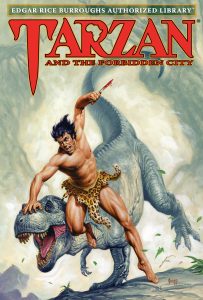 Tarzan cared little for the fate of adventurer Brian Gregory, drawn to the legendary city of Ashair by the rumor of the Father of Diamonds, the world’s hugest gem. But to the ape-man the tie of friendship is unbreakable, and Paul d’Arnot’s pleas move him to agree to guide the expedition Gregory’s father and sister have organized for his rescue. The enigmatic Atan Thome is also obsessed with the Father of Diamonds, and has planted agents in the Gregory safari to spy out its route and sabotage its efforts. Both parties reach their goal, remote Ashair…as prisoners of its priests, doomed to die in loathsome rites.