Get 4 hardcover books (Tarzan® 5-8) of the
Edgar Rice Burroughs Authorized Library™
for the price of 3!

Tarzan and the Jewels of Opar (Tarzan Book 5) 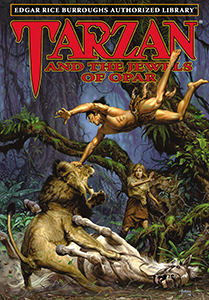 Afterword by Scott Tracy Griffin
When fate deals a devastating blow to Tarzan and Jane’s fortunes, the ape-man must once again refill their coffers from the legendary treasure vaults of Opar, forgotten outpost of lost Atlantis. There awaits the high priestess La, ready to sacrifice Tarzan upon the altar of the Flaming God for having spurned her love, even while the traitorous, half-bestial high priest of Opar schemes to usurp her rule.

Meanwhile, Jane faces her own troubles when she falls victim to the machinations of disgraced Belgian officer Lieutenant Werper and a band of ivory and slave traders. But when an earthquake strikes down Tarzan and leaves him with only the memory of his youth as an ape, how will he unravel the nefarious plot that imperils Jane’s life and recover the stolen jewels of Opar? 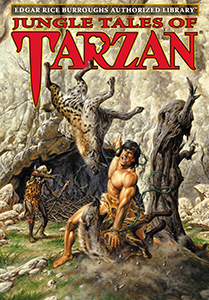 How did the helpless child of the shipwrecked couple John and Alice Clayton become the superhuman legend that is Tarzan of the Apes, Lord of the Jungle? The twelve archetypal coming-of-age tales that compose this book tell the full story, finding their place alongside the richest and most meaningful allegories of mythology.

Tarzan grows to adulthood among the apes of the jungle, facing the dawning realization that he is not like them—he is a man. As he battles for survival against savage beasts and merciless cannibals, he experiences a growing intellectual maturity that includes the pangs of his first love, an emerging spirituality, and a longing to discover his place among his own kind. 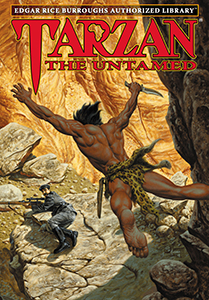 World War I enflames East Africa as German troops raze the Greystokes’ estate, where Tarzan returns to find the charred, lifeless remains of his beloved Jane. Consumed by vengeance, the ape-man wages guerrilla warfare against the hated enemy, using his most savage tactics to help the Allies drive the invaders from his land.

As the British army prevails, Tarzan departs to rejoin the great apes that are his family—only to be confronted by a trackless wasteland that stands in his way. Having endured a trial of unimaginable torment, he enters the inaccessible valley of Xuja, the city of maniacs. Outnumbered by crazed foes and their lion and parrot familiars, the ape-man must liberate his friends from a city where madness rules. 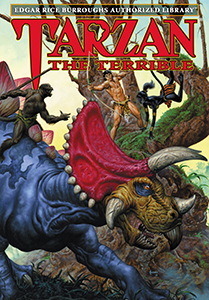 Driven by the single-minded purpose of tracking the missing Jane and her German abductor, Tarzan braves the forbidding wastes of the great barrier swamps to enter the primeval land of Pal-ul-don—an unforgiving world of tailed humanoids pitted in unrelenting war, where the fierce reptilian gryf stalks its prey.

As Jane battles to free herself from captivity in A-lur, the City of Light, and flees deeper into the deadly environs of the strange land, she must learn to hone her own jungle skills and emerge as a heroine in her own right…or succumb to the merciless perils of savage Pal-ul-don. Meanwhile, a fierce stranger follows Tarzan into the interior, bearing a rifle and bandoliers, bent on a mysterious quest.