Further Adventures Beyond the Farthest Star

Book #5 in the Wild Adventures of Edgar Rice Burroughs Series.

Like fellow Earthman, Tangor from the story Beyond the Farthest Star, American OSS officer Thomas Randolph is mysteriously teleported to a foreign planet where he lands in the center of a 100-year war that mirrors the Allied Powers’ struggle against Adolph Hitler’s Third Reich.
Unlike Tangor, Randolph – now Tomas Ran – finds himself behind enemy lines where he gains a first-hand view of the inner workings of the corrupt Kapar empire. Will Tomas, using his OSS skills, be able to devise a plan to escape with the beautiful Unisan prisoner, Loris Kiri, that will allow them to join her countrymen in their struggle against the Kapars?
American novelist Edgar Rice Burroughs debuted the world of Poloda in the pulp story Beyond the Farthest Star in 1940 just as Hitler’s Nazis marched across Europe and the Imperial Japanese extended their reach across the South Pacific. Burroughs’ youthful idealism regarding the nobility of America’s previous war efforts had given way to a mature perspective of the savagery of combat that stains every battlefield. Burroughs’ deeply-held views are reflected in this tale about a planet ravaged by 100 years of conflict as the nation of Unis devotes its entire existence to the struggle of freedom against tyranny.
Author Lee Strong created this second adventure on the planet Poloda, which lies beyond the Globular Cluster NGC 7006 ‘ 450,000 light years away from earth. Join Tomas Ran as he explores Poloda, battles Kapars, and finds love Beyond the Farthest Star. 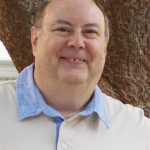 Lee Strong’s heart was captured by the dinosaurs found At the Earth’s Core in 1962 â€“ he has been a Burroughs reader ever since. Lee also worked for the US Department of Defense (DOD); changed international policy with a single report; deployed to Kuwait; saved taxpayers $5 million; and reformed the $2 billion DOD Personal Property Program. A Soldier of Poloda is Lee’s first novel. He is currently working on two Pellucidar novels with more to come. Lee’s motto: More Adventure ! More Excitement !! More Burroughs !!!

COVER ART: Chris Peuler is a genre illustrator based in Chicago, working primarily in fantasy and science fiction. A traditionally-trained digital painter, Chris has created vivid imagery for various gaming and book publications, as well as taking time to work on his own personal portfolio. This beautiful, other-worldly cover art is his first full wraparound dust jacket painting for ERB, Inc.
INTERIOR ILLUSTRATIONS: Earl Geier has illustrated horror, fantasy and science fiction scenes in the role playing game industry for Fasa, Chaosium, TSR, Fantasy Flight, Dark Conspiracy, and others. He has illustrated books for Cemetery Dance, Chaosium, Gryphon, American Fantasy Press and Subterranean Press, and covers for The Fandom Directory. In the comic book world Earl has drawn for Dark Horse Comics, Comizone, Now, Innovation and DC Comics. His artwork has been featured as background in the TV show “Supernatural Let
It Bleed” Earl lives in Chicago, Illinois.
See other books in The Wild Adventures of Edgar Rice Burroughs Series
#1 Tarzan: Return to Pal-ul-don
#2 Tarzan on the Precipice
#3 Tarzan Trilogy
#4 Tarzan: The Greystoke Legacy Under Siege
#5 A Soldier of Poloda [Further Adventures Beyond the Farthest Star]
#6  Swords Against the Moon Men
#7  Untamed Pellucidar