Beyond the Farthest Star: Restored Edition

Available in a trade paperback, a hardcover edition and a hardcover Collector’s Edition (SOLD OUT) limited to 200 copies with a signed bookplate.

In 1940, as the world hurtled into the darkness of global conflict, Edgar Rice Burroughs turned his legendary writing talents toward an interstellar tale of wonder and adventure set on a war-racked planet—one whose star was so distant that it was invisible to the Earth’s most powerful telescopes. Featuring a protagonist who is transported to the planet Poloda by means reminiscent of John Carter’s projection to Mars, Beyond the Farthest Star is set in a wholly unique solar system in which all the planets are aligned in the same orbit and connected by means of an atmosphere tube that allows for potential travel between worlds via airplane.

What has been unknown to readers is that the 1941 Blue Book magazine publication comprising Part I of Beyond the Farthest Star was heavily edited, with a substantial number of line edits on almost every page and several lengthy and meaningful passages—some more than a page long—excised throughout. That altered and abridged text was used as the basis for all book editions of the novel—until now. We are pleased to announce that we have gone back to Edgar Rice Burroughs’ original typescript from our archives in Tarzana, California, and restored the author’s preferred text of the novel in Beyond the Farthest Star: Restored Edition. Now, for the first time, enjoy this classic science fiction adventure in the way that Edgar Rice Burroughs intended it to be read!

The Beyond the Farthest Star: Restored Edition will be available in a trade paperback, a hardcover edition and a hardcover Collector’s Edition. All editions will feature a newly commissioned frontispiece by renowned artist Mark Schultz; classic interior illustrations by Roy G. Krenkel; an introduction by noted science fiction author Paul Di Filippo; a preface by ERB, Inc. Director of Publishing Christopher Paul Carey discussing the restorations to the text; maps of the planet Poloda and the Omos star system; a diagram of the Unisan alphabet and numbers; and an extensive section of rare and previously unpublished bonus materials mined from the archives of Edgar Rice Burroughs, Inc., in Tarzana, California. The book is expected to ship Early Fall 2021.

Preorder your copy of the Beyond the Farthest Star: Restored Edition today! 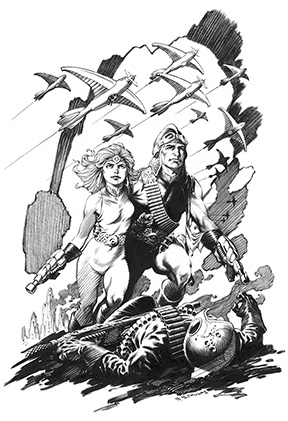 A Planet in Peril

When Nazi warplanes blast an American fighter pilot out of the sky, he awakens not in the expected afterlife but on a far-flung planet—one of eleven interconnected worlds hurtling around a strangely constructed star system. On Poloda, he earns a new name—Tangor, one who came from nothing—and a new home among the brave people of Unis, a nation locked in perpetual war against the brutish, totalitarian Kapars. But when news comes of a powerful invention that could turn the tides of the conflict, Tangor must undertake a daring undercover mission behind enemy lines. There, in vile Kapara, he will not only risk life and limb, but also brand himself as a traitor in the eyes of his newfound friends, as he continues his fight for freedom beyond the farthest star!

Special Offer with Preorder of Hardcover Collector’s Edition (SOLD OUT)– 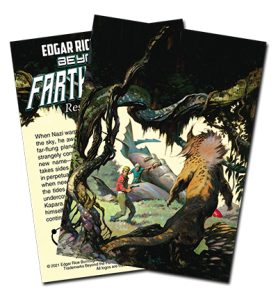 All preorders of the hardcover Collector’s Edition of Beyond the Farthest Star: Restored Edition placed directly from ERB, Inc.’s online store will come with an exclusive collectible trading card featuring the classic cover art to the novel by the legendary Frank Frazetta.

The hardcover Collector’s Edition is limited to only 200 copies and will feature a special Beyond the Farthest Star: Restored Edition bookplate signed by Mark Schultz (frontispiece illustrator), Paul Di Filippo (author of the introduction), and Christopher Paul Carey (author of the preface), along with a facsimile of Edgar Rice Burroughs’ signature.

Get this special offer only by preordering Beyond the Farthest Star: Restored Edition from our online store and selecting the option for the hardcover Collector’s Edition.

Frank Frazetta (1928–2010) was an American artist of fantasy, science fiction, and popular culture. He is often regarded as the “Godfather” of fantasy art, and is one of the most renowned illustrators of the twentieth century. Throughout the 1960s and 1970s, his artwork graced the covers of dozens of Edgar Rice Burroughs’ books.

Roy G. Krenkel (1918–1983) was a noted American science fiction and fantasy artist who was a mentor to the legendary Frank Frazetta. Danton Burroughs said of him, “Roy Krenkel was a key factor in the 1960s revival of my grandfather’s writings. Krenkel’s illustrations forever secured his position as one of the all-time great Edgar Rice Burroughs illustrators.”

Mark Schultz is an American cartoonist, illustrator, and author whose interest in adventure fiction and the sciences led him to create his award-winning Xenozoic Tales comics, as well as SubHuman, in collaboration with paleontologist Dr. Michael J. Ryan. He has illustrated a collection of Robert E. Howard’s Conan of Cimmeria and written the science primer The Stuff of Life: A Graphic Guide to Genetics and DNA. His illustrated novella, Storms at Sea, was released in 2015. Currently, he writes the adventures of Prince Valiant for King Features Syndicate and is in the process of creating a new Xenozoic story. His illustrations, commissions, and sketches can be found collected in the Carbon series.

Paul Di Filippo sold his first story in 1977, and since then has produced over forty books of short and novel-length fiction. He lives in Providence, Rhode Island, where he haunts H. P. Lovecraft’s footsteps daily, with his partner Deborah Newton and a cocker spaniel named Moxie.

Christopher Paul Carey is the Director of Publishing and Creative Director of the ERB Universe at Edgar Rice Burroughs, Inc., the company founded by Mr. Burroughs in 1923. He is the author of  Swords Against the Moon Men—an authorized sequel Edgar Rice Burroughs’ classic science fantasy novel The Moon Maid—and the forthcoming ERB Universe novel Victory Harben: Fires of Halos. He has scripted several comic books set in Mr. Burroughs’ worlds, including Pellucidar: Across Savage Seas, Pellucidar: Dark of the Sun, Carson of Venus: The Flames Beyond, and Pathfinder Worldscape: Dejah Thoris. He has edited more than sixty novels, anthologies, and collections for a variety of publishers, and had the honor of working with Mr. Burroughs’ original manuscript to prepare the text for the present edition of Beyond the Farthest Star. He lives in Southern California.